The characteristics of CureTape® are different compared to the regular tapes currently used by many doctors and physiotherapists. The tape is constructed with a high-quality cotton base that provides elasticity characteristics similar to those of human skin (130–140% self-stretching). Its acryl adhesive, hypo-allergenic backing, in wave-form, clearly reduces the risk of skin irritations and allows the skin to breath. The adhesive characteristics of the surface are activated by body heat. The tape is air- and water-permeable, while still being water resistant. Due to these characteristics, once fixed in place, the tape can be worn for several days (4-5 days) without any loss in the quality of its effect. 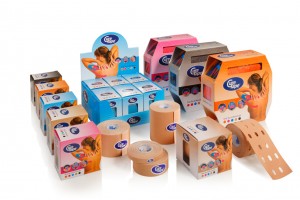 CureTape® and the Medical Taping Concept

CureTape ® and the Medical Taping Concept are closely connected. The background of medical taping was established in Japan and Korea in the 1970s. At the time methods of taping were developed with the idea that movement and muscle activity are essential in maintaining and recovering health. The idea was that muscles are not only attributed to the movements of the body but also control blood and lymph circulation and body temperature. Currently many people in Asia, Western Europe and the U.S. working in the healthcare industry (doctors and physiotherapists) are using this method to treat their patients.

Pursuing the science of movement (Kinesiology), a new kind of elastic tape was developed. The tape supported the muscles in their function without restricting their range of movement. By treating the affected muscles in this way, the body’s own healing process could be activated. During the development of this method it soon appeared that the possibilities of application were more divers.

Elasticity and thickness of CureTape®

The tape has about the same elasticity and thickness as the human skin. The relation between the tape’s the skin is thought to create a lifting effect on the epidermis. Due to this lifting effect more space is created in the subcutis, where receptors, blood and lymp
h vessels are located. By using different taping techniques several other effects can be achieved as well.

Physiological movement is supported and the body’s own healing process is activated. In other words, the tape supports exactly that which ideally the body would do itself. The lifting effect of the tape on the skin improves the subcutaneous blood circulation and lymphatic flow. Through the decrease of pressure the initial lymph vessels can open wide. The hypoallergenic, porous, skin friendly properties of the tape make it possible to wear the tape for many days, making a 24 hour a day treatment possible.

After more people started working with the concept new techniques and additions were developed. Thus new methods of treatment came into being, such as ‘Lymph Taping’, ‘Meridian Taping’ and ‘Cross Taping’. All these methods have been included in the Medical Taping Courses which are given under the MTC umbrella. The concept can be used by physiotherapists, doctors, orthopedics, sports coaches and masseurs, but also by non-medical practitioners. However a basic knowledge of anatomy and medical terms is required to use the tape in the best and most effective way.

To many professional Healthcare practitioners Medical Taping has become an essential additional method in their practice.

In contrast to conventional taping methods, which often effect a disturbance of the joints and the course of movement because using of non-elastic materials, the new kind of taping effects a different result.

The principle is: activating instead of fixing.

The popularity of CureTape has spread rapidly throughout Europe and beyond in recent years, and therapists are already firmly convinced of CureTape’s beneficial effects. The next generation CureTape® developed by our R&D department is CureTape-“Punch”, a perforated version of regular CureTape®. 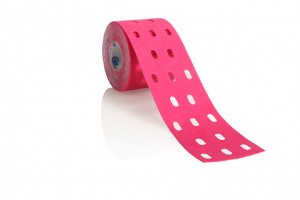 The perforations give this tape a greater capacity for stretching. The skin and fascia are stimulated in the area of the PunchTape’s perforations, and the skin has more scope for ventilation.

Stretching the skin and fascia can produce effects on various systems, such as the neurolymphatic and endorphine analgesic systems. CureTape-Punch® can be used to extremely great effect for this purpose.

We use cookies to ensure that we give you the best experience on our website. If you continue to use this site we will assume that you agree with our privacy- and cookie policy.Ok